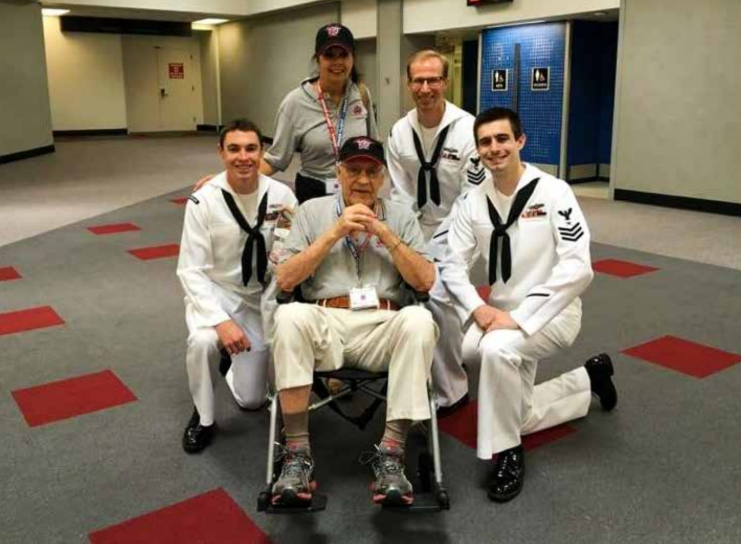 Paul Bouchard was sixteen years old when he asked his parents to sign a letter of consent that would send him on the journey of a lifetime.

"I think they mildly tried to discourage me," said Paul, "but I was determined, and they signed me off."

While many young men were preparing for their junior year of high school, Paul and the men who had enlisted with him were heading off to take part in World War II.

Today Paul lives in St. Albans. It's the same town he was born in ninety years ago, where he married his bride, Irene Goldsbury, where the couple raised their four children and the town where he spent 22 years teaching history at Bellows Free Academy in St. Albans.

Paul and his brother Robert both joined the service to fight for their country, and Paul credits Robert's departure as the catalyst for his desire to serve.

"That was the main reason I wanted to enter. I wanted to follow in Robert's footsteps," said Paul.

In 1944 Paul boarded a train and went off to boot camp in Sampson, NY. While in boot camp, Paul formed close relationships with his fellow soldiers, some of whom he still communicates with today.

During the approximately six months of boot camp, the war officially ended. There was still work to do, and Paul and the men he trained with were told that they would be going out to replace the men who had been in combat.

After completing boot camp, the soldiers were given their assignments, and much to Paul's surprise he and his friends were assigned to travel aboard a Navy minesweeping ship in the Pacific Ocean.

Before the men could board the ship, they had to make the 2700 mile trip across the country. The journey was a 'no frills' affair.

"We traveled from New York to the West Coast in a cattle car. We ate our meals standing. It was very rustic accommodations. There were no Pullman cars. We slept in our seats," said Paul, "We were young; we didn't know the difference between that and luxury."

Once they reached the coast, the men were assigned to various vessels and set out to sea.

"It was adventurous. I enjoyed the experience, and I'm glad I had it. I probably wouldn't do things any differently if I had to do it again," said Paul

Paul soaked up the travel and the adventure, the new experiences, the new friendships, and a whole new existence.

Coming from a quiet life in St. Albans, where he had spent most of his time in Franklin County, the intensity of the entire adventure opened Paul's eyes to the scope of the world around him.

Minesweepers in the Navy were sent out after the World War II came to a close to clear the waters of live mines.

The trip on the minesweeper was no Pacific cruise; it was considered one of the most dangerous operations carried out during peace-time.

"We were so young and naive, we didn't appreciate the danger," said Paul with a chuckle.

Sixteen-year-old Paul embraced the opportunity to see the world. Robert, Paul's brother, spent his service as a secretary in Pearl Harbor, arriving after the Pearl Harbor attack.

"He had a difficult time. He was there for the entire war," Paul said with a laugh, "I'm out on a minesweeper, and he's in Hawaii at a desk."

Paul spent about a year on the minesweeper, heading to the high seas just as World War II came to a close. The ship and her crew made their way through the open sea, searching out and destroying mines as they went.

"They destroyed the mines very primitively. The ship had long cables on buoys that would stretch out from the ship and cut the lines of the mine cables which were anchored below the surface. The mines would float to the top, and the officers would use a rifle to shoot the mines and detonate them," Paul explained.

Paul enjoyed the 'brotherhood' that came with life in the service.

"We supported each other, and that got us through," said Paul.

During his time in the Navy, he attained the rank of Seaman Second, which might not seem like much to some, but it was a lot more than most 16, or 17-year-old boys can say they have earned.

One of Paul's most memorable stops on the Pacific journey came when the ship stopped in Japan.

"I had no sense of geography at the time. When we got as far as Japan, for me Japan and Burlington were in the same category. I had no concept of the geography or the distance. When I got home and reflected on it, I thought that was quite remarkable that we did all that," said Paul.

When the American ship reached the island of Japan and dropped anchor, the men could not help but feel the lingering effects of the hard-fought war on the Japanese people.

"There was still a lot of animosities there. The Japanese, considering their culture, would bow to us. We were the conquerors," Paul said.

"The Japanese would come up to our ship in their very primitive craft and collect our garbage. Not all of our soldiers treated them with respect, and I felt sorry for the Japanese people," Paul recalled.

The return trip through the Panama Canal was another highlight.

"We went out on a cattle train and came back through the Panama Canal. That was an interesting experience too," Paul said.

The ship brought Paul and his shipmates back to the East Coast via the Panama Canal. On a Naval base, somewhere along the coast, Paul left his Navy years behind him and turned his face for home.

"I was ready to be discharged when the time came. I grew up a lot in the service, matured a lot," said Paul.

Paul's daughter Paula, who joined him for the interview, beamed with pleasure as she listened to her father speak of his life. He returned her smile warmly and made a statement that was well worth speaking.

"I think it's almost an obligation to pass these stories along," said Paul.

The two years that Paul spent in the Navy expanded his horizons dramatically.

"While I was in the service I realized the value of education," Paul recalled.

Paul returned to Vermont in 1946 and re-enrolled at St. Mary's High School in St. Albans. While in school he met Irene Goldsbury and the two fell in love.

Paul graduated from high school in 1947 and went on to St. Michael's College. After graduating from college, he went on to law school in Boston.

Paul made up his mind after law school that he was going to propose to Irene. She had been waiting eight years for him, and that seemed long enough.

The two were married on September 7, 1953, at St. Mary’s Church in St. Albans. On December 9, 1954, the couple welcomed their first child Paula into the family.

"That's a highlight, having Paula, my first born," said Paul."

As life tends to do, it became apparent that a career in law was not going to be the proper path, and Paul decided to try his hand at education. He applied for a job at Milton High School, where he taught for one year.

"It was a matter of necessity; I needed employment," said Paul, "We were married, and we had little Paula. I had to do something. I enjoyed history, and when there was an opening, I took it."

After leaving Milton, he taught for 22 years at BFA St. Albans, taking education courses while he taught to earn his education degree.

Recently, Paul was chosen to take part in an Honor Flight, where he and other World War II and Korean War veterans are given the opportunity to take a trip to Washington DC for a day where they are honored for their service.

"We were greeted at the airport by members from all branches of the service. There were even Cub Scouts and Boy Scouts, and we both got to meet Bob Dole,"' said Paul's daughter Paula.

Paula was able to accompany her father on the trip. Fourteen vets and their guardians made the trip to Washington D.C. for the Honor Flight.

"It was a super emotional day," said Paula, recalling the opportunity to see her father honored.

The veterans were able to see the World War II memorial, the changing of the guard, and the Korean Memorial.

"The Honor Flights organization wined and dined the veterans and made them feel so special," said Paula.

Most of Paul's Navy friends have passed, only one man remaining, and he lives in Colorado. Paul's brother Robert who is 94 this year lives in California. The two brothers had the chance to see each other (two years ago?) and the time was deeply valued by both, and it is safe to assume there was much reminiscing.

War is never a pleasant thing that should be entered into quickly, and no war has had the impact on modern times like World War II has had.

The men and women who served in The Great War and the time directly after it, have stories to tell that seem surreal in an age of cell phones and supersonic jets.

For one 16-year-old boy, fresh out of his Junior year in 1944, World War II was a springboard to a perspective he would never have attained in his hometown.

"When I recall the time I spent in the Navy I enjoy it, but at the time I didn't have an appreciation for it," said Paul with a chuckle.