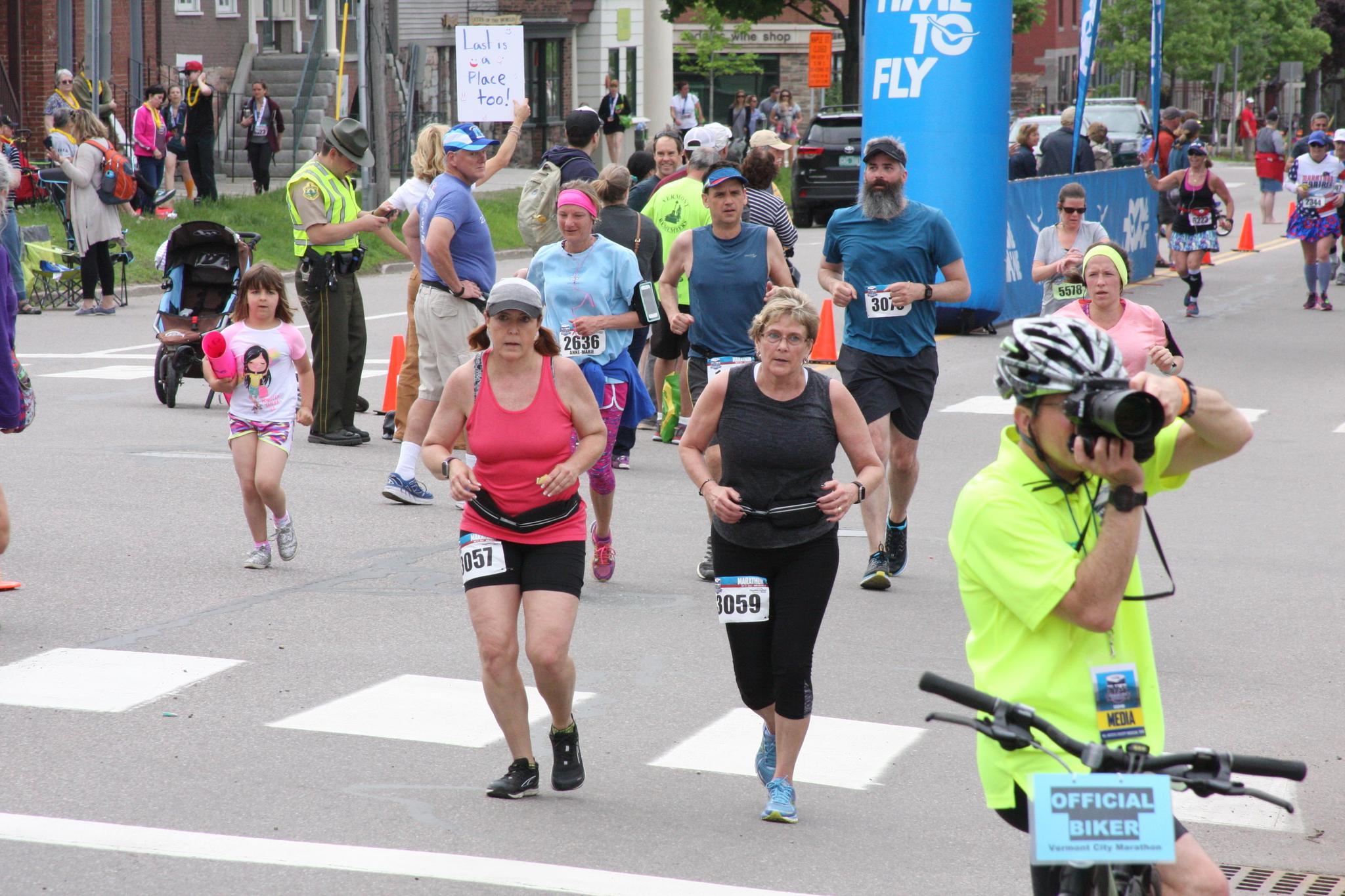 Like many runners, Papazoni began training months in advance, logging countless hours on the road and in the gym to prepare to run 26.2 miles.

Every runner has a different motivation for running, and Papazoni speaks openly about the reason she took to the road.

After living thirty years as a smoker, Papazoni knew that she needed to get her health and her life back on track.

"My doctor had warned me that I'd have COPD before I was sixty if I didn't do something about my smoking habit," Papazoni shared.

Anyone who has had to break an addiction knows it's not an easy task, and Papazoni knew she'd have to find something to fill the void--she turned to running.

"The inspiration started five years ago when I quit smoking; I wanted to take up a good habit to replace the bad. I had a window of opportunity to be restored and I didn't want to waste it," explained Papazoni, "running a marathon wasn't in the forefront of my mind then; I was glad that I found I could run more than a quarter of a mile."

"It's become my 'addiction' instead of smoking. It's also become my tool to inspire others. It's a miracle that I can run at all with the number of years I've smoked. I believe God has had a hand in making it possible for me to do this. A lot of people who have smoked for that long are on oxygen," said Papazoni.

During this time Papazoni met the woman who would be her first 'Sole Sister,' Jennifer Ward Parent.

"Jenn had set out to do exactly what I wanted to do. I watched her while and I knew that if she could do it, so could I. She has been my running partner and my trainer in both my half marathons and the full marathon. She’s been an inspiration to me," said Papazoni.

After finishing her last half marathon Papazoni told Parent that she wanted to compete the Vermont City Marathon. Parent was ready for the challenge.

"There was no place for me to go further for my passion except for a full marathon," said Papazoni.

The two ladies started training for the marathon on January 27, 2018, a cold time to be logging long distances outdoors.

Most of the long runs the ladies completed were done in Enosburg on Saturday mornings.

"We'd run around town and on 105. The first Saturday the temp was -3, and we ran seven miles. We learned a lot about the town of Enosburg--who let their dogs out and when they went to the store,” said Papazoni, "Most of the training was done with a winter hat over our ears. We'd have frost in our eyelashes and hair."

Papazoni and Parent followed a weekly schedule with a set number of miles they had to complete each week. The last part of April and the beginning of May they were running five days a week--morning and evening.

"At the heart of training, we would run 20 miles during the week and then twenty miles on the weekend," said Papazoni.

Papazoni utilized the treadmill to help her increase her pace, while long, slower runs outdoors were intended to build endurance.

"I found that I ran mileages I had never thought I could. In almost all of my training I'd start to get tired and I learned to push through," said Papazoni.

Running, like any aerobic activity, can play tricks on the runner. Some days Papazoni recalled that three miles felt harder than twenty.

"It's the nature of the beast. That feeling of breathlessness will go away if you keep your mindset in a positive place," said Papazoni.

All of the hard work came to a culmination on Sunday as the women headed to Burlington to take part in the Vermont City Marathon, the largest single day, outdoor sporting event in the state of Vermont, and a Memorial Day weekend tradition that's taken place since 1989.

Papazoni had trained extensively, but one thing she couldn't train for was the experience of the day itself.

"The excitement was almost overwhelming coming. It made me feel like a kid again, and I didn't expect that," said Papazoni.

The crowds were so large and the excitement was almost tangible; as Papazoni recalled the events of the day, she is sure that she will keep a better pace next time, now that she won't be so awed and thrilled by the scene around her.

“A woman running beside me who was seven months pregnant told me that the first marathon is the hardest,” said Papazoni.

When the gun sounded for the start the crowd was so large it took Papazoni four minutes to cross the start line.

"The excitement of the marathon, which I loved, was so much different than other races I've done. It did actually sap some of my energy. I'm 53 but I felt like I was seven. This was the biggest crowd of people I've ever run with. The first few miles I was in tune to all of that before I started to feel tired. The excitement does carry you, and the enthusiasm of the crowd really does lift you up," said Papazoni.

The residents of the city of Burlington surprised Papazoni as much as the crowd of racers.

"There were drummers along the road playing to encourage us. There was a guy in a pair of shorts and work boots with a Rubbermaid tote, and he was beating it to help encourage us. I was fatigued at points and didn't want to keep running, but the crowd was still out there encouraging us," said Papazoni, "People along the way set up drink and food stations, had signs, and put up sprinklers for runners to cool off in."

As the miles wore on, Papazoni began to feel the adrenaline of the crowd fade and the fatigue of hours of running set in.

"At mile 18, I got to the point where I didn't care anymore. I just wanted to finish the race. At miles 20 to 24, I was just working to keep myself going. At the last two miles, I knew I was going to do it. At the end, I looked at the result that over 2,000 people started the race; many didn't finish. It struck me that I was grateful that I could finish," said Papazoni.

Parent finished the marathon ahead of Papazoni, completing it in under five hours while Papazoni's time came in at 5 hours 14 minutes.

"I expected to work hard and struggle, but not so early on," said Papazoni, "The things that kept me going were the thoughts of people who knew I was doing the race and who had been encouraging me. I knew that my husband Dale was there at the end with my friends ready to watch me finish. The goodness of people, from Facebook wishes to those given the day of the race, kept me going."

There were certain goals that Papazoni had set in her mind; some she could reach and others she let go.

One thing that stood out to Papazoni was the camaraderie that she built with people she had never met before in her life.

"The last part of the marathon was where I met the most encouraging people. Those people were the ones with the most interesting stories. When your body is broken down and your mind is starting to break down, you learn a lot about those around you. That's what I'm going to remember. When we'd pass each other we'd encourage each other. Everybody there helped remind me why I was doing what I was doing," said Papazoni, "I think you hit a place of vulnerability; I didn't see anyone there who was just there for themselves. No matter how tired they were they were looking to encourage each other. There were so many different people from so many different walks of life and we were all in the same struggle."

This week Papazoni has taken a few days to rest and recoup, hoping to hit the road again by the end of the week. If she feels well enough she might join Parent in the Milk Run this weekend.

"I won't lie; it hurts a lot!" said Papazoni with a chuckle, "but the inside excitement still overtakes the pain."

Papazoni won't be resting on her laurels. She'll be running alongside a coworker this summer, helping her prepare for her first half marathon.

"My supervisor Jessica Terrazzano Irish started to run and we'd run together as she was training. She is now training to do a half," said Papazoni, "What happens to inspire you, helps to inspire others, even if you don't know it."

Joining forces with another 'Sole Sister' is something that Papazoni enjoys as much as she enjoys running; helping others break through the running barrier never grows old.

Not only does running improve physical health, which Papazoni is grateful for, but it also builds an enjoyment of many things in life.

"When I run I see so many things I'd never see otherwise. And I always enjoy seeing other people run and knowing what they are enjoying. I always wanted something to be passionate about in my life and I've tried a lot of things. This came later in my life, but it really is my passion," said Papazoni.

As a wife, this wasn't a journey she took on alone, and training for the marathon was a big endeavor.

"Dale did extra chores, he supported me, got his own dinner, spent Saturday mornings alone so I could run," said Papazoni of her husband, "through all of it--from training to racing and recovering, it amazes me to see how much love I received. If I wasn't loved another day from this day forward, I've been loved more than most."

Many people have complimented Papazoni, and she's grateful for their support, but she wants each person to hear her message.

"I'm just like anybody else. Anybody can do this if they want to. As my brother pointed out on Sunday after the race, I was running in the ‘grandma class’; nothing like a good brother to keep you humble," Papazoni said with laughter, recalling the happy time around the dinner table after the marathon, her husband, brother, sister, and mother all present to celebrate with her.

Her family had brought a big lasagna dinner and balloons to the house, a meal she was grateful for after the long hours on the road.

With her first marathon behind her, Papazoni has completed a big step in her running goals, but she's got more dreams she'd like to fulfill.

"I had one set goal when I started doing the half marathon; I wanted to participate in the Boston Marathon. You have to qualify, and I need to drop an hour for my age group," Papazoni noted, "Even if you qualify, they have to draw your name. I'm the kind of person that, after a short rest, I'll be ready to take on a new goal. I hear of people in their seventies and eighties who do it. If I can keep going, I might make it. My mind has not let go of the dream to be able to do that. It wasn't that long ago that I'd never have been able to imagine doing what I just did."

Papazoni wonders what it would be like to run with 50,000 people after running in Burlington. For now, she's got a short-term goal to fulfill.