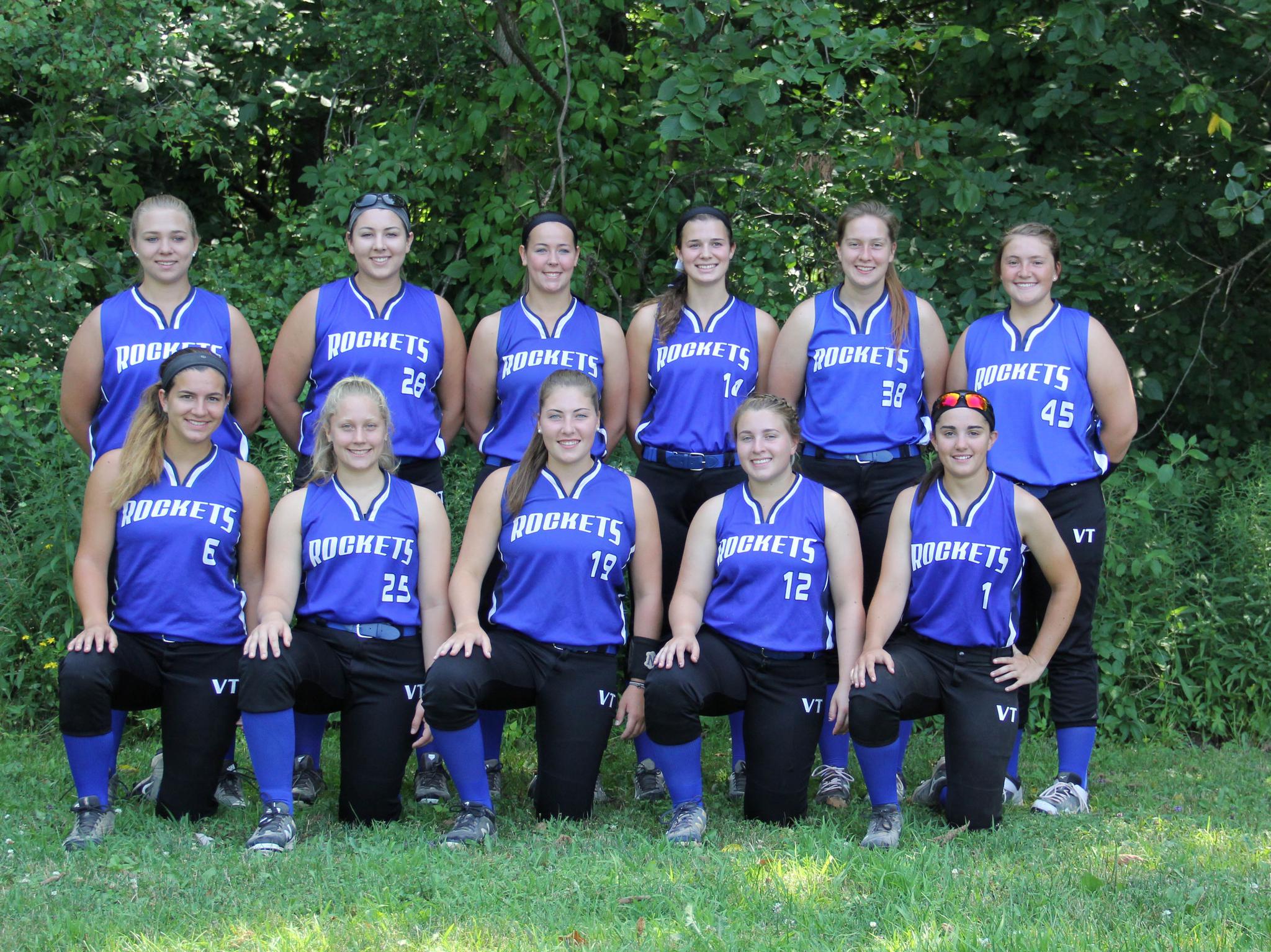 The Rockets Softball Program will be filling Franklin County softball fields this weekend as they host the Vermont Rockets Invitational. Twenty-three teams will participate in the tournament with girls in the 14U, 16U, and 18U categories competing.

Games will be played at three locations with the 18U Rockets playing at St. Albans Bay, the 16U playing at the Collins Perley Sports Complex, and the 14U girls competing at Georgia Beach.

This will be the largest number of teams the program has hosted, and Ralph Halbach, president of the Rockets, tipped his hat to the folks who have been hard at work organizing and the parents who've been lending a hand in the process.

"Connie Sheets and Mike Thweatt are the heart of the program.  Mike has been with me for 15 years, and he and Connie are some of the most important people we have. Connie does a lot of the work, and she knows everything that's going on," said Halbach, "This weekend is going to be very good. It's the largest group of teams we've ever gathered, and we've got a lot of great parents helping to get this together."

This year marks the 24th year that the Rockets softball program has been providing Vermont girls with an opportunity to hone their skills and compete against excellent teams during the summer months.

"Allen Ricker and I, who are both from Wisconsin and met in Vermont, were talking about how our softball league was folding 24 years ago," said Halbach, "We took the best players from the three teams and formed the Rockets."

The Rockets are a 501 C3 organization and remain fully donation based. No one is paid for the services they give. The team takes four road trips each summer facing teams from a broad area. Thanks to a large budget, raised through player fundraising and other donations, the Rockets program is able to pay for the players' food and lodging, making it a little easier for families to participate.

During the offseason, Halbach hosts winter pitching clinics where girls as young as eight and ten receive instruction to help them improve their skills on the mound.

"We work for 14 weeks at four hours, one day a week," said Halbach, “I usually see 30 plus kids at the pitching clinic in the winter, and that's how we build the Rockets program. We get the pitchers and build the program around them."

Most of the girls come from Franklin County and northern Chittenden County, but some come from as far as Newport and Barre.

"I work with these young girls who start pitching and I tell them that it's going to take three years to be proficient," said Halbach, "If you're lucky you'll be a star in high school. If you're really lucky, you'll be a star in college. We have a lot of smiles and we meet a lot of great parents."

Some of those parents have a long-standing connection with Halbach and the Rockets.

"My hygienist was on my first Rockets team. I now coach her daughter in the pitching clinic. Currently, I have five girls in my pitching clinic who are associated with my former players," said Halbach.

Girls who reach the 14U age are selected to join the Rockets and travel with the team. Halbach and the Rockets coaches have one goal in mind.

"The Rocket program is designed to help girls develop skills and compete against good players," said Halbach, "We take the girls all over New England, Montreal, and New York. It's an eye opener for them to play against the competition we see."

Halbach, who was the pitching coach for the Saint Michael's college softball program for 16 years, brings plenty of expertise to the game, and thanks to his instruction and a lot of hard work, some of his players have enjoyed great success.

"Meggan (Roberge) Dulude, pitched for MVU and went on to St. Mikes where she's in the Hall of Fame," said Halbach, "Megan had 800 strikeouts in her four years of college. She faced UVM three times in her college career and never lost a game. She could throw a great rise ball."

Halbach began working with Meggan in the sixth grade; she is now the assistant athletic director at Saint Michael's College.

"There's no second place for Meggan," said Halbach, "She's the best pitcher we ever had."

Casey Brooks and Audrey Thweatt are two other great ballplayers that came through the program.

Aubrey went on to play softball for a Division I college, walking onto the team her freshman year and then receiving money in scholarships the following year.

"After 25 years you've seen a lot," said Halbach, "I remember Mckenzie Pratt who played for us while she was going through her cancer treatment. She was such a sweetheart."

"Heather won a state championship in her freshman year of high school at BFA. She was one of our first Rockets pitchers," said Halbach as he reminisced about seasons past.

More recently, Alex Benoit of Richford, who worked with Halbach and played for the Rockets, took her team to three consecutive state titles.

"Alex was a true grit player. She was one of the best ever when it came down to just knowing she could do it," said Halbach, "It's amazing how many girls have played for me."

With many girls coming into the program at early elementary school age, Halbach sees them grow year after year.

"I see girls when they are eight or nine years old until they are 18. I'm glad to help the young ladies out and they really appreciate it," said Halbach, "What's happened in the last 24 years has been amazing. It's hard to teach pitching, you have to be able to see things that others can't see, and I'm able to do that. It's made it possible for me to do this."

At seventy years old, Halbach still coaches his own team and works with the pitchers in the winter, and he takes none of it for granted.

"I've been very lucky, my shoulder has never given out, I still throw batting practice, and I'm still capable. It's been fantastic."

Halbach and his staff have spent years investing in the lives of young softball players, and he's happy to say that there's plenty of talent in the program this year and plenty coming in the years ahead.

"I've got some really good young ones coming up. Lizzie Bourdou from Swanton. Ava Harrison, who's in the seventh grade in St. Albans--they're going to be very good. There's a lot of good stuff coming in Franklin County” said Halbach, “Softball is healthy in this county."

The Rockets teams are never large, and Halbach keeps it that way for a reason.

While most of this year's teams have girls from Franklin County, especially MVU and BFA high school, they also have many from Chittenden County, and there are even four girls who travel from North Country.

"The kids are very dedicated and they work hard," said Halbach of this year's team.

With the high level of competition in high school sports, the chance to play on a competitive summer team gives athletes an edge when they return to school.

"When the girls get back to their high school programs they have learned so much and grown in confidence. Even if we don't win a lot during the summer season, all the girls grow," said Halbach.

Dave Blodgett, who coaches the 18U Rockets team, spoke of some of the other benefits that come from a summer of softball.

The focus on development is seen at every level in the Rockets program.

"I believe the Rocket’s main focus for all age groups is development. We participate in some very high-level tournaments and while we are always trying to win--development, teaching/coaching is our main focus."

Blodgett has seen a lot of softball with the Rockets in the eight years he's been with the program, but one play stands out in his mind and provides an excellent example of what his players are capable of.

"One of the greatest moments I have coached or have seen is the triple play we had three years ago. We had a very rare triple play; a girl caught the ball at third, threw to first for a pickoff, and first threw back to third for a tag out," said Blodgett, "Even the umpire said it’s the first triple play he had seen in 30 years of umpiring."

Blodgett extended a heartfelt thanks to Halbach and all the others who keep the program running.

"We have had many great moments over the years with perfect games, no-hitters, walk-off home runs, grand slams," said Blodgett, "We have been very blessed to have such talent come through the Rocket organization."