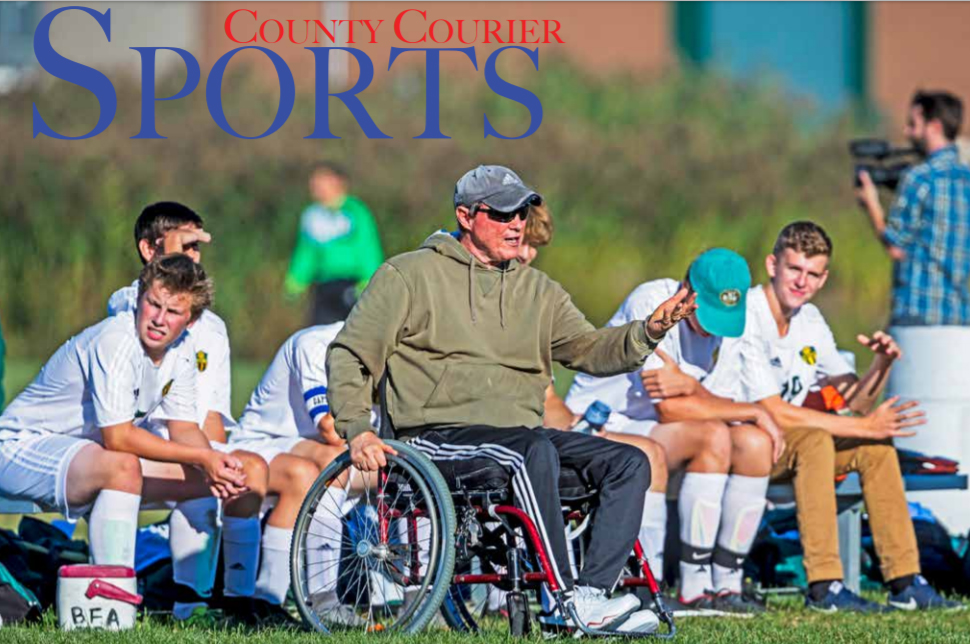 Franklin County's soccer fields now lie dormant for winter, but Mike Menard, who has coached the BFA St. Albans JV boys soccer team in the fall for the last eight years, is in Florida coaching his boys varsity team in the warm sunshine.

"Kids in Vermont are dedicated. They show up to practice, and they work hard. It's a different mentality up here in this region. Most of these kids grew up in this area, and they are hard-working kids. I love coaching those kinds of kids," said Menard.

Those who know Menard know his dedication to the game of soccer as well as his desire to prepare young athletes for success on and off the field. For Menard, it is a life work.

“Coaching soccer is his passion and his life. He’s refused to let his injury prevent him from doing something that he loves to do,” said Dan Marlow, Athletic Director at BFA St. Albans.

After scoring ten goals in three preseason games, an ankle injury sidelined Menard most of his senior year. He returned briefly, but reinjured the ankle and spent the remainder of the season watching from the sideline.

Menard chose James Madison University where he made the soccer team as a walk-on his freshman year. The following year Menard enrolled at Clinton Community College. He led the team in scoring as a midfielder, and that season’s success earned him a scholarship to Division I Old Dominion University.

"I was doing great," Menard recalled.

Life often throws curve balls just when we least expect them, and Menard knows more about the truth of that than many.

At the height of his college soccer career, while in the best shape of his life, Menard suffered a tragic accident that left him paralyzed from the waist down.

Menard was taken to Norfolk General Hospital where he was given a full body x-ray that confirmed he had suffered irreparable damage to his spinal cord.

Interestingly, the doctors also found that Menard had been playing on a fractured ankle during the soccer season.

"My mom always talks about being tough," said Menard with a chuckle, "She and I were talking the other night, and I asked her, 'Do you remember when the doctor came in and asked me if I had known that I had fractured my ankle?"

With no hope of returning to the soccer field as a player and the end to all he had known as normal, Menard battled with a host of emotions.

"I didn't want anything to do with soccer after the accident. I was kind of bitter. When I got back to Florida, my parents suggested that I look into coaching. When I was 23, I decided to get involved with the recreational soccer teams in Volusia County," Menard said.

Menard embraced his new role in the game; his love for soccer and his ability to impart the skills and attitude needed to excel got him a job at Deltona High School in Florida, where he coached for ten years.

Eventually, he made his way back to Vermont for the summer and fall months and took a job coaching soccer at MVU High School.

"The seasons are at different times, so I was coaching the varsity program at MVU in the fall and going back to Florida to coach during the winter," Menard explained.

Menard left the MVU job and took the head coaching position at Pine Ridge High School in Florida, the school that he coaches at currently.

One summer Menard saw an ad for the JV job at BFA St. Albans and decided he'd put his name in. He was hired and put a plan in place to spend four months of the year in Vermont.

Coaching the Florida high school varsity team and the Vermont JV team keeps Menard on the soccer field eight months of the year, and he wouldn't have it any other way.

Pine Ridge High School, which has a student body of 1700, began their soccer season on November 6th and will finish up on January 13th.

Weather and temperatures aren't the only things that are markedly different about the game of soccer between the two states.

Soccer is played year-round in the state, and although Menard likes to see student-athletes play multiple sports, specialization is a reality in Florida.

"It's very competitive in Florida. Pine Ridge High School is a 3A team, which means we are in the middle of the divisions. There are 100 schools in our division, which means you have to go through a hundred teams when it comes to playoffs," said Menard.

In Vermont, approximately sixteen teams make the playoffs, and traditionally eighteen teams fill a division. A couple of years ago, Menard's Pine Ridge Panthers made it to the State Regional Finals, which is one game away from the final four.

"That was probably the year we had our best team ever," Menard recalled.

Menard has coached athletes in Florida who have gone on to play for Division I colleges as well as professional soccer teams.

“Mike’s teams are always well disciplined, and they always defend well. That’s his philosophy. If you’re not going to give up goals, you are always going to be in the game. I have total respect for him as a coach and for his ability to teach, even more so because he cannot be active with the kids,” said Marlow.

Returning to Vermont to coach the JV boys is something that Menard looks forward to each year. The younger guys and the more relaxed atmosphere allow him to use different coaching skills.

"It's different training here. I do more technical stuff since the season is shorter. I try to make the guys individually better, technically better, so they can have a chance to make the varsity team," said Menard.

"My job as a JV coach is to improve the technical stuff, while the varsity coach works more on the tactical end," said Menard, "I enjoy it. I work with all the tactical stuff in the winter in Florida."

Tom Fleck, one of the top soccer coaches in the country, known for his time as the coaching director of the Florida Youth Soccer Association (FYSA) and also as the author of much of the youth soccer federation manuals, was a tremendous inspiration to Menard.

"Tom was the one who encouraged me to get involved with coaching licenses. I took the National Youth Licenses and prepared for coaching different age groups," said Menard.

Anyone who has seen Menard on the field knows that he gives his best to the teams he coaches.

"I demand a lot of the boys. It's my job as a coach to pull out the best in them. Even the kids that don't get a lot of playing time, I see them at practice, I see them improving," said Menard.

Skill on the field is imperative for any athlete, but there is another side of the game that cannot be overlooked.

"I think one of the biggest pieces is the mental part of the game. Athletes have to be tough to be able to play at the next level, and they have to be able to take some constructive criticism," said Menard.

Being confined to a wheelchair has changed many things for Menard, but it has also supplied him with a host of life experiences to share with the athletes he coaches.

"Life isn't easy, and you have to work for things. Surviving in a wheelchair and being paralyzed is hard. Anyone who suffers physically has to deal with the struggle of doing things that other people take for granted," Menard explained.

Marlow spoke highly of Menard and the qualities that he brings to the teams he coaches.

“One of the things I appreciate about Mike is that every day he gives us a perfect example of how you face challenges, how you get knocked down, and how you take hold of the opportunities to improve when you get back up,” said Marlow, “He takes his accident, which is what drives him every day, and uses it to learn how to get better. He refuses to let what he can’t do to get in the way of what he can do. That’s pretty powerful.”

Along with Tom Fleck, Menard spoke with great affection for Joe Fiarcoski, his high school coach at MVU.

"Joe was a big inspiration for all of us who grew up in Swanton. I always looked up to him. He was one of the reasons I decided to get into coaching," said Menard.

Menard had high praise for Mr. Marlow and the quality of leadership that he brings to BFA athletics.

"I've had a lot of athletic directors in Florida. Mr. Marlow is amazing, and I don't know if people up here know how lucky they are to have him," said Menard, "I can't believe he does all the things he does and where he finds the time to do it!"

Living with a disability and learning to overcome the difficulties associated with that disability has given Menard a perspective on life that most people could benefit from.

"I live one day at a time; I live today and don't worry about tomorrow. In all of this, my mom and dad are inspirations for me. My parents have dealt with health problems, and they persevered. I also want to thank Mr. Marlow who has given me this opportunity to coach," said Menard.

“My faith in God has given me the strength to get through each day knowing there is a purpose and plan for our lives when,” said Menard.

When it comes to coaching, Menard spoke of one of the most important lessons he wants his athletes to learn.

"Every kid is important, and I tell the kids that. Your self-image should never be tied to how much playing time you get in a sport. You're important because you're important," Menard stressed.