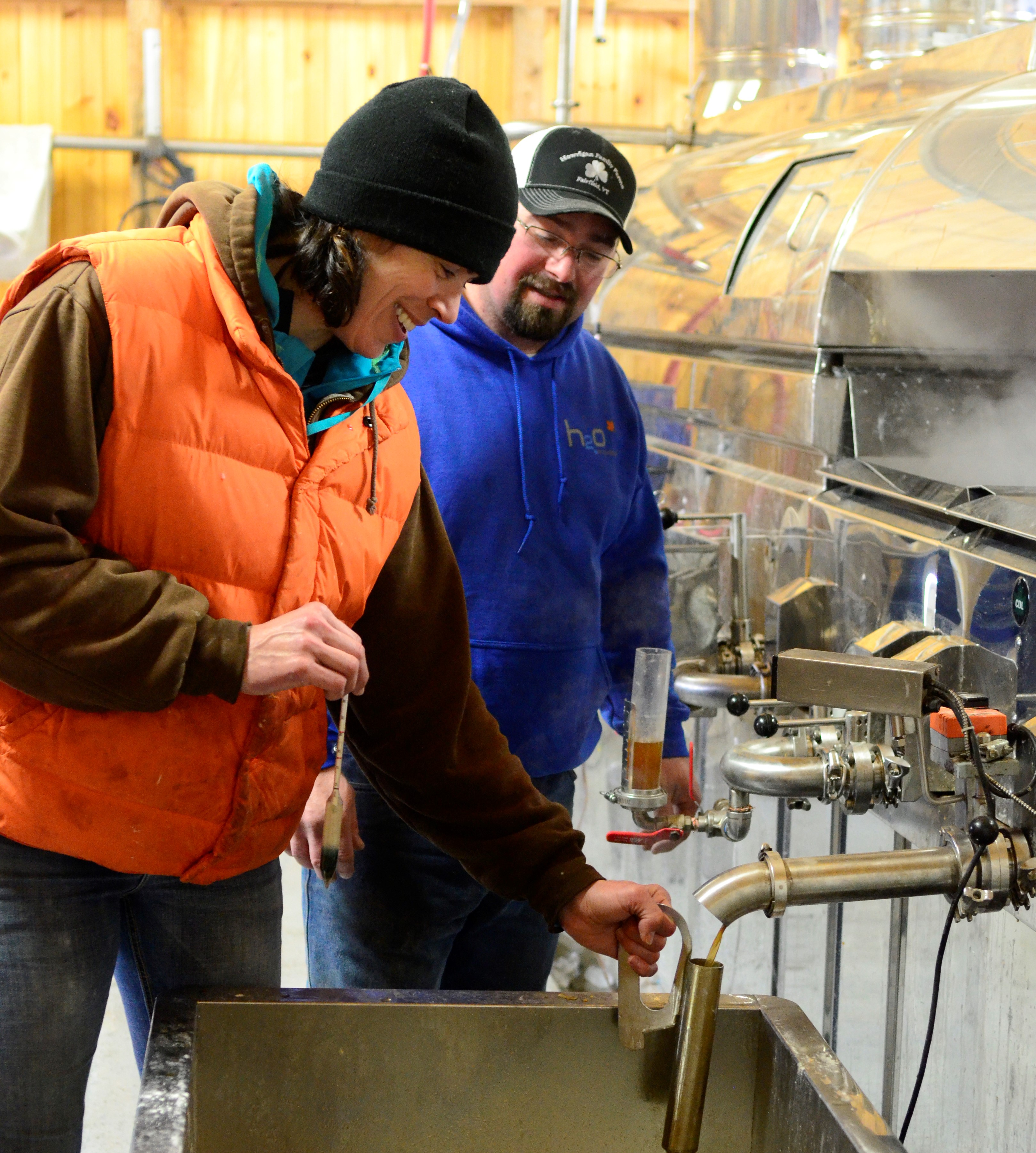 Gagne's' Borderview Orchards, nestled on the Canadian border in the town of Franklin, is owned by Albert and Laura Gagne who view the operation as much more than a business; it is a piece of Albert's heritage.

The Gagne's sugarhouse is a bit of beauty in its own right--vaulted, pine ceilings, post and beam design, and windows filled with tiny test jars, glowing gold in the muted light of a snowy, March afternoon.

Gagne has sugared his whole life, and whether he's managing the boiling or casting a glance at the old cast iron taps that sit on the windowsill, it's the love of the process that keeps him coming back year after year.

The steep, wooded hills of Richford provided Gagne with his introduction to sugaring. His grandfather, Clifford Snider, the father of seven children who each had large families themselves, gathered the kids and grandkids to help him hang buckets every spring.

"I can remember riding through the woods on the fender of my grandfather's tractor when I was six years old," said Gagne with a smile, "My grandfather had 7,000 buckets on the mountain in South Richford. With all the kids and grandkids he had plenty of labor."

Sugaring with his grandfather was a weekend event, but during the week he had another outlet for his love of sugaring.

"I couldn't wait for my neighbor's tractor to come down the road when I was a kid. I'd jump on the back and go pick buckets after school," said Gagne, who grew up in Highgate.

Currently, Albert, Laura, and their crew tap just shy of 16,000 trees spread out over five properties on the Gallup Road, and each bush is slightly different.

"There are a lot more sugar maples in the bushes to the west of us, and they have some southern sun exposure," said Gagne, "They are the first to run."

Gagne's own bush faces north and sit behind his sugar house.

"It takes my woods a couple of weeks before we get the big flow," said Gagne.

Recently, the Gagnes have worked with Greenleaf Forestry to obtain organic certification.

"The forester looked over the property, made sure we weren't damaging the property with our techniques of pipeline installation or any bad logging habits. She made sure everything looked good," said Gagne.

They now use an organic defoamer and organic soaps to clean up after boiling. The certification comes with a USDA approval, so there's a lot of record keeping to be done.

"It's really about assuring that there's quality control. It doesn't mean that we didn't put the effort in before, it's just that now we have to put it on paper," said Gagne.

The certification allows the Gagnes to earn as much as fifteen cents or as little as five cents more a pound for their syrup.

"The real reason we did it was that we wanted to set ourselves apart a little. If the business goes crazy--let's say the Adirondacks are all tapped and Canada starts tapping Ontario and the price of syrup drops, there will be a lot more conventional syrup out there than any buyers could need. Maybe the organic syrup will be a little higher up the ladder and that might help us get our crop out the door down the road. The organic market for syrup is growing, so that's the market I want to be in," said Gagne.

Gagne began sugaring for himself in Franklin in 2007, setting up a modest, wood-fired evaporator system.

"I built my sugarhouse to resemble the sugarhouse that I grew up in," said Gagne, "a wood-fired style where we'd push the wood in on a track or trolley that fired the arch. It was like a pit, lower than ground level. That worked pretty well, but it's hard to be progressive and rustic at the same time."

After five years it was time to reevaluate the process, and Gagne decided to make some changes.

"We started getting bigger, and since we didn't take any time off from work to sugar, we needed to be efficient.  We added an RO which helped us process a lot more sap and raised our efficiency," said Gagne.

Gagne eventually replaced his wood-fired unit with an oil unit that burns 15 gallons of oil an hour and can make about 45 gallons of syrup in an hour.

"We had an RO with the wood, but it wasn't as big as what we have now. We needed a bigger RO to get a bigger concentrate level for the new system," said Gagne.

Gagne is pleased with the system he's operating now.

"We bought this evaporator used," said Gagne, "this thing could last forever if we don't do something silly."

The only way Gagne could see himself replacing the current equipment would be through expansion, something he's not quite ready to consider.

The increase in size through the addition of the leased bushes he's taken on over the years has him at his max with the current system.

Gagne pointed out that if he were to expand he'd also have to find more taps to lease near his current location, and that's not an easy thing to do.

Gagne and his crew produce from 150-170 barrels of syrup a year depending on the season, and thankfully most of those seasons have been good.

"The last ten years have been good years. There was one year that we had eighty-degree weather in March, but other than that they've all been good years," said Gagne.

Weather isn't the only piece that has provided production. Gagne has an excellent team that works with him.

"We have some good help, and they have been helping us make more syrup per tap. They bring so much knowledge here with them," said Gagne.

The Gagnes hire out the bulk of the tapping to Richie Rainville and his crew of workers. Gerry Whitney of Franklin, works full time for Albert during sugaring season, both in the woods and during daytime boiling.

"Laura and I problem solve and get everything put together for the boil," said Gagne, "and Laura and I finish the boiling at night after work."

On a peak day, the Gagnes have made as many as ten barrels a day, which means they've made 450 gallons of syrup.

Albert's sons Austin and Joel have also been working with him since he started his operation.

"We lean on them as much as we can," said Gagne.

So far the 2018 season has been a good one for the Gagnes. Sunday's boil was a small one, just two hours, but it was one that required some extra attention. The pans were all cleaned after the last boil, and now they needed to 'sweeten' up again as the fresh sap flowed in from the RO.

"This year has been excellent," said Gagne, "If we don't get any silly weather, I don't see why we won't make a good crop of syrup."

When it comes to weather and wive's tales, Gagne has some thoughts of his own.

"I've seen some of the sap run the best when it was bone dry outside; the sap was just raging. Cold nights and warm days produce the best. I don't like to see a lot of sun--overcast and forty is perfect in my book," said Gagne.

"As far as snow and west wind--I have a hard time believing all that," Gagne said with a chuckle.

All the new technology has made sugaring much more manageable for those interested in investing in the business, and many people in the county have decided to give sugaring a shot.

"Technology has made this--not easy--but a lot easier. It's taken a lot of the back pain out of it," said Gagne, "There are pumps you can turn on with your cell phone and smart RO's that you can monitor with your phone. Technology has advanced the business, for sure."

When asked what his grandfather would think of all the changes, Gagne shook his head.

"Oh man, he wouldn't be able to comprehend it. He wouldn't. He had a 16x20 evaporator with no RO. He burned 39 and a half gallons of oil an hour, to make 30 gallons of syrup in an hour. That's what it took. It was more than a gallon of oil to make a gallon of syrup," said Gagne.

Right now Gagne can make a gallon of syrup for less than a half a gallon of oil, a far cry from his grandfather's day.

Laura Gagne moved to Vermont from Pennsylvania over a decade ago, probably not thinking her life would take some of the turns it did.

"I had no experience with sugaring before I moved here," said Laura, "We had family friends who lived in Fletcher, VT, and we always had a large container of maple syrup in our fridge from them. That family used buckets and boiled in a tiny sugarhouse. I knew what maple syrup was and that I liked it, but I didn't know what went into it."

"I don't think I ever saw the rig or the sugarhouse on the property that belonged to our family's friends---and then I met Albert," said Laura, "and said with a chuckle, "and I said 'I think I'll sugar the rest of my life.'"

Laura came into Albert's life just as he was making some changes to his operation.

"It was interesting because there was no pipeline in the woods the summer that I met Albert. He told me that if I wanted to help, I could. Things grew from there," said Gagne.

A true outdoorswoman, Laura took up the offer, and the rest is history.

"Granted, it's nice to get paid for all the hard work that you do, but we're going to do it regardless--just maybe not on this scale," said Gagne, looking to Laura. The two laughed together.

Prices, investments, paybacks all have their place, but for Gagne sugaring also has a lot to do with memories made years ago while watching friends and family gather and boil and learning the secrets of one of Vermont's finest arts.

"A lot of people sugar because it's part of their heritage," said Gagne, "they can't not do it. If we didn't have the trees and the opportunities given to us by our neighbors, I'd be sugaring for someone else. I'd be in their sugar house boiling, that's what I did before I had this opportunity--it's in my blood."