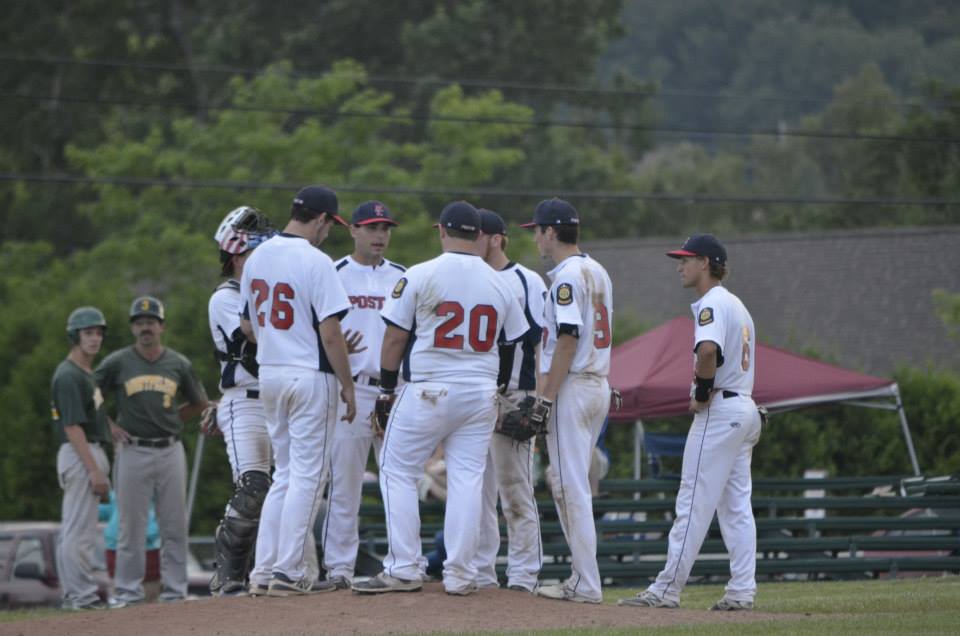 Bellows Free Academy, St. Albans, has been home to many talented athletes, and Nick Swim is one of those who has carried his high school success to the next level.

Geoff Murray, head coach of the Bobwhites all four years that Swim was on the baseball team, remembers him as a stand-out player who could never get too much of the game.

"I would call him a 'baseball rat.’ He was always on the field or in the cage looking to improve. He never had to be coaxed; he did it on his own. That speaks to his work ethic and his ability to persevere when confronted with a challenge," said Murray.

Swim's dedication to the game earned him the respect of his peers, and his talent and grit came through in big spots.

"In the state championship game we played against Essex, Nick was sent home on an overthrow. It was an aggressive play, and the ball beat him by three or four feet. The catcher was waiting for him, but Nick jumped over the catcher and was safe," said Murray, "In a big moment, he wasn't afraid to make a play."

"He was so instinctive; he played with no fear. He would try things no one else would, and he'd often make those plays," said Murray, "he brought that fearless attitude to the field and it would inspire others."

Swim played varsity baseball and basketball for the Bobwhites from 2008-2011. He was named Gatorade Player of the Year for baseball in 2011 and achieved the coveted 1,000 point mark in basketball.

"I'm a huge believer in a multi-sport athlete. You learn different things in different sports. On a basketball court, you learn how to be a teammate. On a baseball field, you learn strategy, and you learn how to work through failure. Baseball: you are never going to be perfect at it. It teaches you how you handle that. I would always get angry when I got out, but it humbles you and teaches you that you need to work harder," said Swim.

After graduation Swim spent a year at Bridgton Academy in Maine, honing his skills to earn his best shot at a chance to play Division I baseball in college.

Those goals were brought to fruition when Swim landed a spot on the roster at the New Jersey Institute of Technology.

"Playing at the Division I level makes you realize you have to love the game to play there. You're playing every day for five or six months; you have midweek games while you're still trying to keep in touch with friends and family and get your school work done. At the end of the day it was worth it for me for the experience I gained," said Swim.

Adversity struck during his time at NJIT in the form of an arm injury. Swim left the Division I team and went to rehab the arm.

The loss of the spot at NJIT didn't deter him. He joined the Castleton Spartans where he went on to complete his years of eligibility, putting up impressive numbers and earning awards for his exceptional play.

"The environment at Castleton is second to none for what they provide for their student-athletes. I met a lot of really good people and had great coaching. I also got to play in two NCAA Regional Tournaments; it was a really good experience," said Swim.

"He's mentally as strong as any player I have coached. Coming back from injuries is more mental than physical. He has that competitive spirit and that drive never to quit," said Murray, of Swim’s success at Castleton.

"Coach Izaryk was a great influence. He is a great communicator and a great leader, and his knowledge of baseball is second to none," said Swim.

"Izaryk taught me there are days to play and days to coach; 17 to 19-year-old guys don't want to be barked at. There's a line between letting them figure things out and helping them understand what they are doing wrong. If they don't want to hear it, they won't make the change. 'You can lead a horse to water, but you can't make it drink.’ That's really relevant to this generation," said Swim.

The summer of 2017 brought Swim new opportunities to test his coaching skills. He became a First Assistant Coach for the Sanford Mainers, a New England Collegiate Baseball League team from Maine.

"We had guys from Division I schools from all over the country," said Swim.

Coaching at the college level has provided Swim with a new level of expertise.

"The great thing I've learned is the strategy level of the game at the college level. It's an accelerated version of baseball. You still hit, throw, and run, but it's all at a different level," explained Swim.

Being involved with the Mainers afforded Swim the opportunity to give local guys a chance to test their mettle against some excellent competition.

Mark Connor of BFA St. Albans, who attends Clarkson University, where he plays baseball, played for Swim over the summer.

"It was a great experience playing for Nick for the Mainers. He is a very smart coach, and he's fun to play for. Throughout the years Nick has been a big influence in my baseball career and has taught me many great lessons," said Connor.

Division I players who play on NECBL teams are allowed to throw a certain number of pitches in the off-season. When they reach that limit or suffer an injury, they leave the team, and a replacement is called.

"I watched Mark grow up, and I've worked with him in the summer and the offseason. To see him competing at that level was a lot of fun," said Swim.

Swim will be returning to coach for Sanford this summer.

"I've had guys from Division I schools text me and tell me that playing in Sanford was the best time of their lives," said Swim.

Currently, Swim is attending Ball State University in Indiana where he is volunteering with the baseball program and earning his Master's Degree in Sports Administration with a minor in coaching.

"I work as a graduate assistant, and I do research for the doctors in the master's program I'm in. I also do research in fundraising in collegiate athletics, and I teach as well," said Swim.

Swim is the Division Director of Baseball Operations for the team, and he is in charge of all travel, food, game times, and hotels.

On the internal side of the program, he sets up camps, works with recruits, and breaks down film for the coaches.

"We have a young team this year, so we worked to get everyone comfortable with Division I baseball," said Swim.

With his last year of college ahead of him, Swim is ready to take on the next challenge.

"I will graduate next summer, and I will see where next year takes me and what opportunities arise. I'm in Indiana now, but I am not glued to a location," explained Swim, "It's always a goal of mine to move back to Vermont at some point and hopefully work and coach there. In the future, I'd like to go back and give back what I've learned. I want to invest in baseball and basketball."

Murray looks forward to seeing what the years hold for Swim.

"Nick has almost finished the process of being a student-athlete, getting his education, and competing at the next level. Nick will bring all his experience with him to the community he lives in. He's a great guy, and I'm proud to see his success," said Murray.

Coaching is something that is at the heart of Swim's passion for the game, and he comes by it naturally.

"My maternal grandfather Jim Ballou coached baseball for 40 years in South Royalton, and the Division IV state championship trophy is named after him," said Swim.

Swim has gleaned as much knowledge and wisdom as he can from the coaches he has worked with, and he enjoys employing that as he works with different teams.

"Many modern programs are focused on personal stats. A good coach has to be working on the Team vs. Me all the time," said Swim.

Coaching allows Swim to work on players' physical prowess, but it also extends to mindset and work ethic.

"I think the biggest thing about coaching is being able to make a positive change in an athlete's life. I know that I've had many coaches who've helped me, on and off the field, to be a better person, and I want to give back," said Swim.

The success Swim has enjoyed since he graduated from college has not caused him to forget his roots in Franklin County. He remembers his high school coaches and athletic director Dan Marlow and the investment they put into his life as a student-athlete.

"Mr. Marlow is such an inspiration to me, and I check in with him regularly. He makes time for me even though he's busy. It was awesome to have someone when I was young who could guide me in the direction to be a proper gentleman, to work hard, and to never give up. I always try to think about what Mr. Marlow would do," said Swim.

"I was lucky to have Ken Fairchild as a basketball coach; he's a legend at BFA, and to have Geoff Murray for baseball. Those two guys taught me so much, and I couldn't thank them enough for what they've done for me and what they taught me," said Swim.

"Murray was one of the scariest coaches I played for when I was younger. You're going to respect the game, the players, the coaches, and him. He gives all-around respect, but he also demands respect in return. It's not easy to come by that these days," said Swim.

Swim also thanked his parents and his youth coaches for their investment and the passion they instilled in him.

"I've been blessed to have people who have been able to help me on my way; make sure that you reach out to the people who have helped you. It's a cool thing to be able to let someone know they helped you, and you never know where someone is in their life and how that might impact them," said Swim.

Regardless of where he ends up after his time at Ball State, it's safe to say he will be with a team. Even though his playing days are behind him, his desire to compete is as sharp as ever.

"I like to win; the competitive edge doesn't go away."

"I have watched him grow right in front of me; he grew up in a great atmosphere doing a lot of things. He had lots of confidence, and he always maximized the moment and rose to the occasion whatever sport he was playing," said Marlow.

"His mom and dad were extremely supportive of him," said Marlow.

“My family has been the single most inspiration for me in my career. They have been there through the ups and downs and supported me no matter what the situation. I wouldn’t be the person I am today without them and I hope one day I can be half the parents they are,” said Swim of his parents Mike and Karmen Swim.

Marlow also noted that Swim is eager to share his confidence and skill with others.

"When he talks with younger kids, the advice that he has to give is so important. It's a powerful statement when it comes from someone who is not that far away from being a peer," Marlow explained.

Swim's tenacity and spirit have left a lasting impression on Marlow.