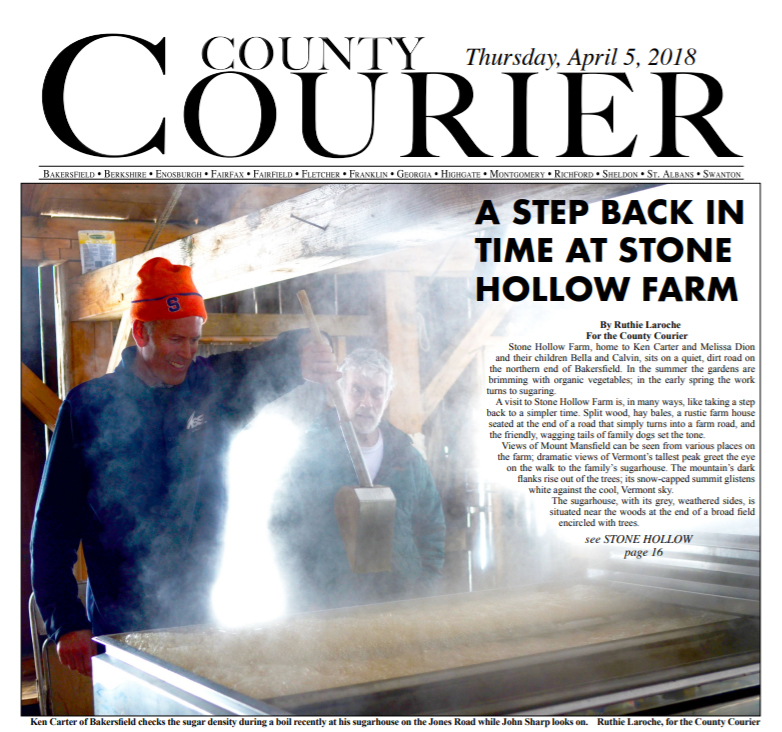 A Step Back in Time at Stone Hollow Farm

Step Back in Time at Stone Hollow Farm

Stone Hollow Farm, home to Ken Carter and Melissa Dion and their children Bella and Calvin, sits on a quiet, dirt road on the northern end of Bakersfield. In the summer the gardens are brimming with organic vegetables; in the early spring the work turns to sugaring.

A visit to Stone Hollow farm is, in many ways, like taking a step back to a simpler time. Split wood, hay bales, a rustic farm house seated at the end of a road that simply turns into a farm road, and the friendly wagging tails of family dogs set the tone.

Views of Mount Mansfield can be seen from various places on the farm, and dramatic views of Vermont's tallest peak greet the eye on the walk to the sugar house. The mountain's dark flanks rise out of the trees, and its snow-capped summit glistens white against the cool, Vermont sky.

The sugar house, with its grey, weathered sides, is situated near the woods at the end of a broad field encircled with trees.

The seasoned smokestack, copper and mauve in the afternoon light, pours out a cloud of sweet-smelling steam--the scent floating on the early spring breeze and filling the air with the taste of maple syrup.

Carter began sugaring his woods in 2006, constructing a sturdy, post and beam sugar house with hemlock logged from the surrounding forest.

Not a single nail was used in the building; each piece was held in place with wooden pegs in true, post and beam fashion.

The sugar house itself is a work of art, rugged beams, wide windows, rustic barn board slats, and sugaring equipment of decades past hung on the rough-hewn walls.

The siding used to cover the frame came from an old sugar house on the property, which makes the building seem much older than it is.

The walk to the sugar house takes about ten minutes on foot, so electricity was never an option, adding to the old-time feel of the place. Carter works to complete his boiling before the daylight fades, using lanterns if things should go late.

Carter produces about 200 to 250 gallons each year, most of which is sold in glass jars at farmer's markets and to friends, neighbors, and family.

This year's boiling has had some added fun and mischief. The Carter family added two new members, Huck and Scout, young puppies who keep Carter company during the boiling. The two pups spend the time frolicking over the worn floorboards and looking for tasty snacks when syrup spills.

Most weekdays Carter boils alone, but on the weekends the sugar house is often a lively place with folks stopping in to visit, play with the dogs, and sample the syrup.

"We do things the old-fashioned way," Carter explained, "but we make a lot of good syrup."

Old-fashioned is a fair description of Carter's operation. He taps the trees the week before town meeting day, hanging roughly 800 buckets in his young bush.

The buckets are emptied by hand into dump stations throughout the bush. The sap runs through a gravity-fed pipe to a large tank, and the tank is then pumped down to the sugar house.

The evaporator Carter uses is wood fired with logs that he cuts and splits during the spring.

Carter didn't grow up sugaring, but he knew it was something he wanted to do, and he took the time to learn the art from those who knew it well.

Before sugaring for himself, Carter worked with a neighbor in Bakersfield for a few years, carrying his young son Calvin on his back while he emptied buckets.

When his neighbor stopped sugaring, Carter worked alongside a friend from Fairfield for six years, watching and learning as he went.

The folks he worked with in Fairfield had a team of horses that were used to gather sap, and Carter remembers how seamlessly the horses worked with the gatherers.

"The horses knew what to do. We could move up a hundred feet and call, and they'd come right up and stop right where they needed to be. They'd wait for us until we got to the next spot and called. That was amazing," said Carter with a smile.

Carter spent most of his time gathering in the bushes he worked in, but he had opportunities to boil as he grew more adept at the process.

When his neighbor in Bakersfield decided to sell his 'rig', Carter made the move to start his own operation, and that evaporator is the one he uses to this day, although he has replaced the pans.

That neighbor still stops in and spends time in Carter's sugarhouse.

"I think he appreciates the traditional style down here," said Carter, smiling.

The sugar makers Carter worked with in Fairfield and Bakersfield were very similar in style to his, and he remembers some of the old 'tricks of the trade' that his friends utilized in boiling.

"Some people still use cream to bring down the bubbles in the pans, but when I was first learning how to sugar the guys who were teaching me just had some fat hanging from a wire in the back pan below the tub. When the foam came up and hit the fat it would be knocked back down," he explained.

Carter uses organic sunflower oil keep the bubbles from running over his pans.

Doing things the old-fashioned way is cheaper and works well for the setup Carter has, but it does have its drawbacks.

On a day that the sap runs well Carter is working hard to keep up with the flow.

The tank above the sugar households 900 gallons, and on this particular day it was full when Carter arrived to boil. On top of that, the tank behind the first one was 3/4 full.

"That's the drawback of not having a reverse osmosis system or any power to the sugar house," he explained, "our boiling time is limited by daylight."

This springs' weather has provided for some wonderful syrup, and thanks to a recent cold snap, sugar makers were still making light syrup last week; three out of Carter's last five barrels were very light and sweet.

"It's almost like we started all over again," he explained, "we made fancy yesterday, and I imagine we will see that again today."

The woods on the property had been logged heavily in the 1990's, so the bulk of the trees that are tapped are about 16 inches in diameter. A twenty-inch tree would be a big tree in the bush.

"Because of their age the trees end early but they run sweet," said Carter.

Most years the bush doesn't produce the standard 'quart per tap,' which is the old rule of thumb for buckets.

"About every third year we will make a quart per tap," Carter said, "Three out of the nine years we hit that mark. We've really only had two bad years."

Carter started boiling in 2008 to fill the downtime between his summer work on the family's certified organic vegetable farm.

"This is my ten year anniversary," Carter said with a chuckle, "This time of year I don't have a lot going on so I can spend a couple of hours at the sugar house boiling."

Carter, like many others who sugar, would say that all practical

and financial reasons aside, there is just 'something' about sugaring that keeps him coming back each year.

"I love doing this for a lot of reasons. There's something about it; it's a Vermont tradition; there's also a lot of mystery to it. You never really know why the buckets are running on a day when it's 30 degrees and snowing. But tomorrow when it's 35, windy and sunny it's not running," said Carter, "From what I've heard there are a lot of days that we've had good runs with buckets and people with pipeline have had poor runs. No one knows why that is, but friends who have both tell me that some days when the buckets are running great the pipeline is frozen."

Buckets or pipeline, sun and snow, wind and rain, season after season, and year after year Vermonters head to the woods to take part in one of the state's most long-lasting traditions. Carter, his family and friends, and the dogs that follow at their heels will be among them.